Hopefully this isn’t the last #VoxBox that I receive, as I would love to review and share my thoughts with you, in regards to another box in the future.

WordPress.com is excited to announce our newest offering: a course just for beginning bloggers where you’ll learn everything you need to know about blogging from the most trusted experts in the industry. We have helped millions of blogs get up and running, we know what works, and we want you to to know everything we know. This course provides all the fundamental skills and inspiration you need to get your blog started, an interactive community forum, and content updated annually.

It finally happened, after months…no…years of leaving over 100 reviews, I finally received my first #Voxbox from Influenster.com. A #Voxbox is themed box full of goodies that you are able to test for free. In return you are asked to leave reviews and submit videos based on the products you received.

So here we go, this is my first unboxing video. 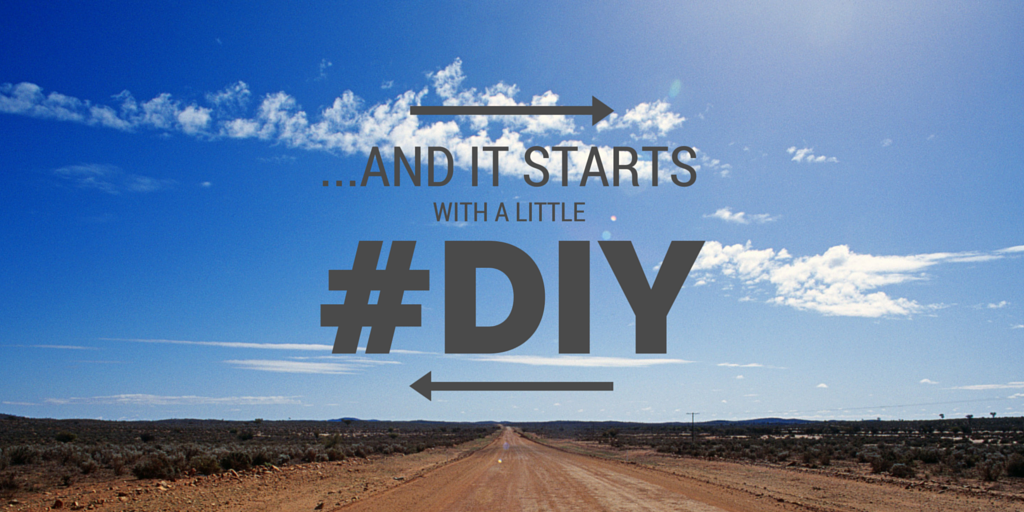 When we moved into this house just shy of two years ago, we had some big plans. Fixing the deck, repainting bedrooms, creating an office/studio space and building a man-cave in the basement.

Bedroom #1
We started small, with the kids rooms. They always seem to be the projects that we want to cross off of our lists first, I decided to start with my sons room. He is a pretty artistic child and he LOVES to draw. Comics, books, characters, mazes and lego villages seem to consume his every thought. So, of course I head over to my Pinterest account and create this cool board which is fully inspired by my son and all his favourite things (yes there is a storage idea for ties, he loves those as well).  I spent a lot of time trying to figure out storage options for him as his new room is now quite a bit smaller then his old bedroom and he has a lot of lego and books to store. But I had an idea…and it was a big one, and it was going to take up a lot of room – or should I say wall?  Oh yeah, did I mention that I was also trying to incorporate a very large, wooden bunk bed with built in desk? Well, needless to say that was the first thing to go. The two beds, built in dresser and desk. Gone. I couldn’t make it work, no matter what I did. Between the bedroom door, the window and closet there was no way that I was making that work, well, that along with my big plan. I replaced his big cool bunk bed with a twin sized captains bed with 6 draws (lots of room for lego and his comic book creations. I quickly realized that this wasn’t enough storage for all his lego so I picked up one of these 10 draw organizers from Canadian Tire (yes…I separated all his lego by colour – and no I don’t suggest you do the same because the hours of sorting only lasted for 2 weeks). 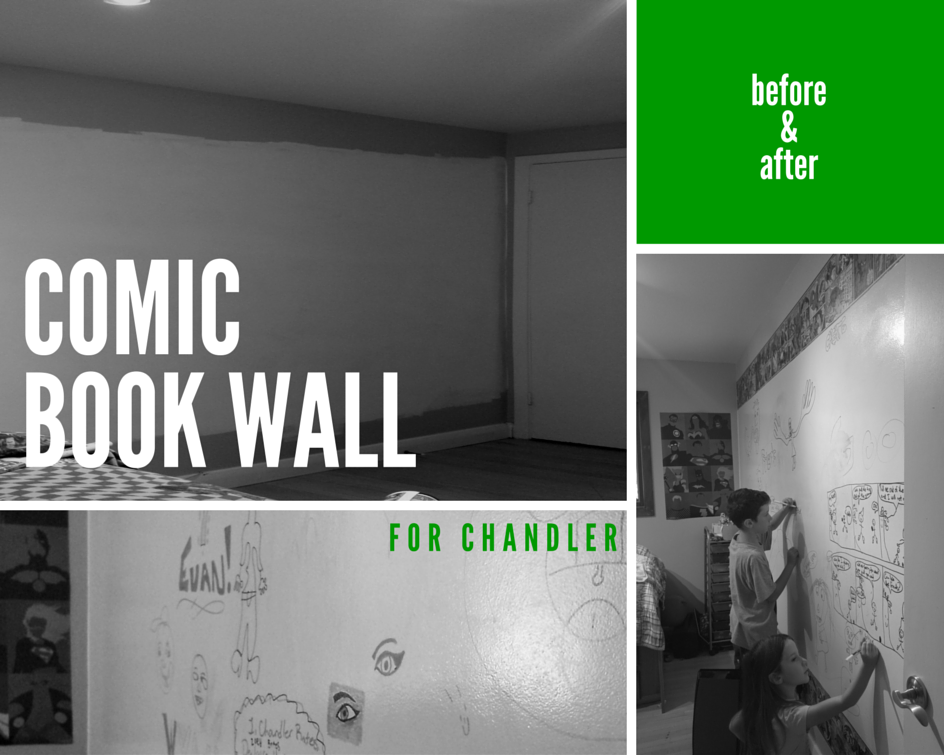 I decided that I needed to figure out a way to turn my sons wall into a dry erase board. The whole thing. My husband (along with everyone else) thought I was nuts, but I started on a mission. How could I turn his whole wall into a dry erase wall? I searched, I pinned, I looked in different stores and nothing. Nothing made sense, nothing was big enough to cover his whole wall, and I was starting to believe that I couldn’t make this whole dry erase wall work. Enter Rust-oleum Dry Erase paint! Game changer! I purchased 2 of these dry erase kits, 2 rolls of this Spider man border and went to work. The whole process took around 3 days, between allowing each layer of paint to dry, and applying the border. I also purchased a super hero poster and a vintage tin Flash sign to a few extra pieces to his newly created comic book themed room.

Final result. 1 totally awesome, almost floor to ceiling, dry erase wall and just as expected, he totally loves it and so do all his friends. 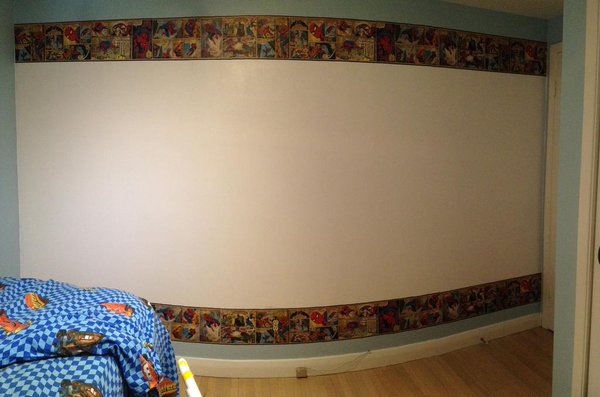 The best part is that his entire room was a surprise. I had moved him to our spare room for a few days and was able to fully surprise him with his new comic book themed room. Dream big my child, dream big. 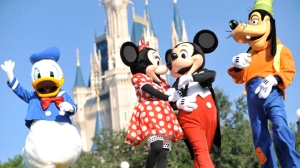 I have started planning our trip to Disney! A place that neither myself or my husband have been. I have no idea where to start or what to even expect. I would like to do this trip on some sort of budget, but I have yet to set one. I will be scouring blogs and Pinterest trying to find the best tips that will make for an enjoyable trip for my family and myself. If you have any advice to offer me, please do so in the comments below. We are a family of 4, with a 9 year old son and 7 year old daughter and we are planning on visiting the most magical place on earth in mid April.

We are looking for tips on the best resort to stay at, meal plan options, must see attractions, information on fast passes, Chef Mickey, and even what to take with us.

On Monday, November 17th, we were invited to Joey’s World to help celebrate their 1st birthday! What an amazing night it was for the kids! 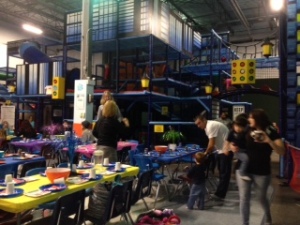 Not only did the kids get to play, eat and dance, they were also able to interact with other children who were just as excited to be there as they were. Joey’s World offered a night of; free play, pizza, popcorn and cake, as well as, a loot bag to end off the night.

The staff at Joey’s World were very accommodating and welcoming, and they provided many entertaining moments for us parents. 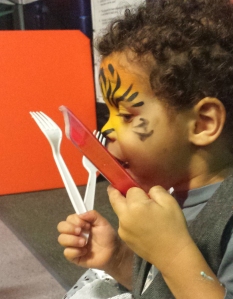 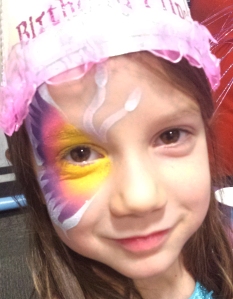 Did I mention that Natasha’s Fab Art were also there providing facing painting for the kids? Zoey and Carter look awesome as a butterfly and a tiger.

Joey’s World introduced 14 new party themes which you can now add to your birthday package. Starting as low as $7, your child can pick from themes such as;

Thank you for inviting us to join in your birthday celebration Joey’s World! We had a great time, and can’t wait to go back. For more information on Joey’s World or to book a party at Joey’s World, please visit http://www.joeysplayground.com/party-rates.html or follow them on twitter @JoeysWorldPlay for updates and special offers and events.

I wonder what my purpose is. A lot.
I believe more so than the average person. I believe that everyone was put on this earth for a reason.
But what is mine?

I think I was meant to be a healer.
To fix everyone else’s hearts, lives, souls…but unable to repair my own.
Unable to understand it even.

I have been looking for something for a long time. That piece of the world that makes me complete.
You will hear me talk about this a lot throughout this blog,
“the piece of me that I long to find”.

My biggest fear is never figuring it out, like a mission that is bound to fail…

It is actually a really scary feeling, (or even belief). The thought that we could only be here for 1 reason, and once complete, so is our time on earth. It’s just a theory of mine, that doesn’t even stem from anywhere, I have no real religious beliefs, no proof or  facts that steer me in this direction of thought. I have no idea where the idea even came from, I would assume a movie (My Sister’s Keeper maybe?) I might have to watch that again to see if it answers any of my questions.

Oh the questions of life. When do they stop, and where do they begin?

Have you had that moment, you know, the one you feel was responsible for changing the path you lead in life? I have. All it took was 1 video. 1 video that a classmate of mine posted on Facebook, and BAM, life as I knew it was over.

Honestly, it changed something in me. It caught my breath, and I swear, I didn’t breathe as I watched in awe of what was on the screen before me. I love these moments, I really do. Finding something that speaks to you in a way that no human has been able to…it’s almost over whelming, and I am so thankful for these small things, that make such a huge impact in my life. Watching it calms me, it makes me free. It centres me like I never understood was possible. A Video, I know, it’s crazy. Just hear me out.

I am one of those people who loves too easily, does too much for others, gives up everything for someone else. I am an old soul, some might even say a lost child. I haven’t fully found my purpose in life. I am still finding myself and finding out what truly makes me happy. So when I do find these little pieces, these little pieces of my heaven, I know that they are clues or pieces that will help me make myself whole. Which is something I long to be, whole. Will it ever happen? I don’t really know. I believe that I know what will make me whole, but I do not know if that is something I may ever be able to face. I am hoping through this journey, I will be able to lead myself home.

So now I will share with you, one of these pieces. This video is titled “The Mountain” by TSO Photography, whom you can find here http://vimeo.com/terjes

I hope it moves you, the way it moved me. Please feel free to share with me, something that has made you stop and catch your breath.

After a long morning at school, and and hour and a half drive, I have finally arrived at BlissdomCA. I’ve been a nervous wreck all day, but as I sit here in my room, eating veggies and dip, and watching the construction workers work on my balcony, I am feeling a little more at ease. This hotel room is beautiful. There are orange accents everywhere which are somehow making me feel at home.

Here’s hoping for smooth sailing all the way through to Sunday. Let the games begin.